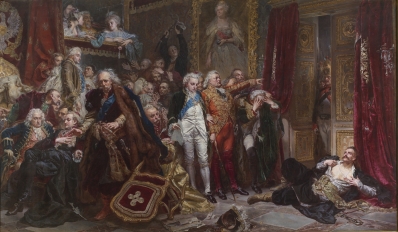 Matejko, Jan (Krakow, 1838 – 1893, Krakow) Reytan, the Fall of Poland 1866 oil on canvas, 282 × 487 cm, inv. no.: ZKW/1048 Zamek Królewski w Warszawie – The Royal Castle in Warsaw Photograph: © Andrzej Ring, Lech SandzewiczThe Műcsarnok in Budapest celebrates the 120th anniversary this year. The creation and inauguration of the institution coincided with the flourishing of the Monarchy and Hungary. The exhibition The First Golden Age presents a selection of masterpieces from the period. Showcasing the painting of nations that once belonged to the dualist state, the exhibition was created in collaboration with museums and private collectors from Austria and Hungary, as well as the Czech Republic, Poland, Romania and Croatia, and presents some 200 paintings. The date of the opening is symbolic: 21 November 2016, centenary of the death of Franz Joseph.

From the very outset the Műcsarnok (Kuntshalle) was open to the art of the Monarchy. The majority of the works and the artists will have appeared before in the exhibition spaces of the establishment. Broad-minded fin-de-siècle politicians had big plans for culture and the arts in the life of the nation and its citizens. Interest in the past of the Műcsarnok is not recent. Many shows around the centenary of the Műcsarnok were dedicated to conjuring up the age and the construction of the building, including the Schickedanz exhibition at the Museum of Fine Arts. 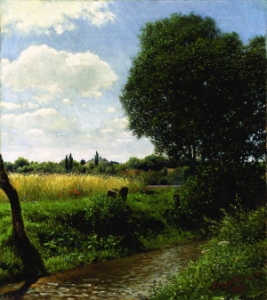 Szinyei Merse, Pál (Szinyeújfalu, 1845 – Jernye, 1920) By the Stream, 1897 oil on canvas, 90 × 80 cm, signed bottom right: Szinyei Merse P. 1897 Kovács Gábor Gyűjtemény – Gábor Kovács Art Collection, Budapest Photograph: © Archive of Gábor Kovács Art CollectionThe rule of Franz Joseph coincided with an age of economic and cultural modernisation in Central Europe. This age saw the creation of the institutional bases of modern society in economics and the arts. At different paces and with varying emphases, the political and financial elites of all nations participated in this process. The legacy of the multinational empire, which ended after its ruler died, remains a crucial part of the cultural identity of the successor nations. The national schools of painting produced outstanding works by international standards. The era of Franz Joseph was truly a golden age in the arts, and painting in particular, in the Austro-Hungarian Monarchy. The National Hungarian Fine Arts Society, which would eventually run the Műcsarnok, received significant support from the state after the Austro-Hungarian Compromise in 1867. Completed by 1896 and successfully adapting to changing functions over the ages, the building was intended, firstly, to provide a regular exhibition opportunity for Hungarian artists, and secondly, to provide an institutional background to connect the Hungarian art scene to the international mainstream in and outside of the Monarchy.

Vaszary, János (Kaposvár, 1867 – Budapest, 1939) Adam and Eve, 1900 oil on canvas, 214.3 × 195 cm, inv. no.: 85 Muzeul Judeţean Mureş – Mureş County Museum Photograph: ©Muzeul Judeţean MureşIn addition to presenting parallel national efforts in painting, the First Golden Age exhibition seeks to illustrate the process by which the activity of the Association, together with cultural politicians, patrons and artists made the fine arts thrive and part of Hungarian culture. The showcased stylistic trends highlight the intellectual image and changes in taste in the age and in the Monarchy. Boosted with artworks from major foreign museums, the Hungarian collection holds surprises for professionals, affording direct comparison of the jointly formulating, yet individually different, painting of the different nations. 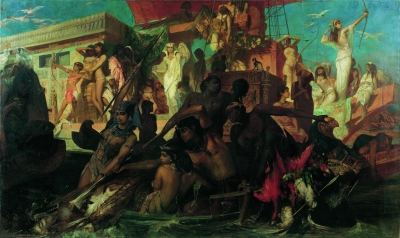 Makart, Hans (Salzburg, 1840 – Vienna, 1884) The Nile Hunt of Cleopatra, 1876 oil on canvas, 275 × 456 cm, signed bottom right: Hans Makart, inv. no.: 5837 Belvedere, Vienna Photograph: © Belvedere, ViennaPresenting an overview of four and a half decades of painting, the jubilee exhibition divides the main stylistic trends into periods (historicism, realism, various modern trends) in chronological order, and explores Hungarian, Austrian, Czech, Polish and Croatian painting. Viewing the works painters from Hungary and the neighbouring nations, the common features are evident, as is the difference between the pre-modern art of Vienna and the art of the Monarchy’s nations. Showcasing many masterpieces of the era, one particularly interesting and spectacular section is a collection of monumental works by the “3M masters”, Hans Makart, Jan Matejko and Mihály Munkácsy. The three great artists depicted themes betraying different historical perspectives and world-views with similarly brilliant colour schemes, affording viewers the special experience, and revealing why they were considered the “painter celebrities” of the Monarchy’s historicist era.

In conjunction with the exhibition, Műcsarnok is publishing an over two-hundred page representative catalogue with writings by the scholarly curator of the exhibition, Ilona Sármány-Parsons, and Ferenc Miszlivetz, György Szegő and Ferenc Tóth in Hungarian and English.

ENTER - Exhibition by the Students of the Art Department, Budapest Metropolitan University (METU)

We inform you that we use cookies to enhance the user experience of the website. By using our website, you acknowledge our information. More informationI agree